For the second straight year Buffalo Grove’s Jessica Soskich withstood the pressure of bowling in the lead on Saturday afternoon of state to win the individual state title Saturday at Cherry Bowl.

“I just wanted to come back and do the same thing as last year and have fun with it,” Soskich said. “I’m just as excited as last year, if not more. I’m in a lot more shock right now. It is going to hit me in the car ride home.”

Soskich, who held the lead after Friday, slipped up in the first game of the day Saturday, shooting a 164 and dropping to sixth place.

But she recovered with games of 265 and 223 and was right back on the top of the leaderboard. Her 618 in the afternoon was good enough to finish with a 2,669 12-game total and hold off a hard-charging Amanda Richae of Hoffman Estates by 17 pins.

“You have to recover from your mistakes and bounce back,” Soskich said. “It was definitely a lot closer this year, so it came down to hitting your mark and marking on the screen. It definitely broke down fast and if you could stay ahead of the transition, you would be good.”

Richae had the best score in the afternoon, shooting a 693, to finish second overall with a 2,652 for her first All-State medal.

“I’m ecstatic,” she said. “It has been a great year and I’m just glad to go out with a bang. I just took things one step at a time and stayed slow and within myself. My goal was just to medal this year after coming close last year.”

Lauren Hays of Salem finished in third place with a 2,627 as she shot up the leaderboard throughout the day Saturday, especially thanks to her 279 to finish the morning session. She also finished third last year.

“I’m happy, considering I finished third last year, too,” Hays said. “I’m excited. My teammates and coach kept me going the whole time. I locked in and was ready.”

Courtney Argus of Dupo overcame four straight opens to start her fifth game to rally for a 171. She kept that momentum going with a 244 in her final game to place fourth overall with a 2,616.

“I’m definitely happy with a fourth place spot,” Argus said. “It is a great feeling. My fifth game I struggled a lot, but I picked it up and the next game I shot a 244, so I came back. It was determination.”

Grabbing eighth place was Natalie Koprowitz of North Mac (2,576), while ninth place was Paytynn Kuhns of West Aurora (2,534). Both girls were in the top 12 throughout the weekend.

“It is pretty awesome,” Koprowitz said. “Everyone shoots for first place, but I’m happy I got a medal. I had to make sure I was never out of it and bowl my best. It was difficult but I came through.”

“I’m really happy about it,” Kuhns said. “In the second half I struggled and I wasn’t sure I was going to achieve it, but I’m happy I got ninth. It was a really hard shot and I just focused on rolling a good ball and whatever happened, happened.”

The biggest jumper in the afternoon was Leah Samuelson-Burkeybile, who was in 30th heading into the afternoon, but finished in 11th place for her second All-State medal. Her 678 series gave her a 2,527 series.

“It is especially great since I got 12th place my sophomore year and wanted to do one better than that, and I got 11th” she said. “I just wanted to do my best in the afternoon. Then I shot 250 and 230 and I thought I had a chance and I got it. I knew what I needed to do. It feels really good knowing I finished my senior year getting 11th in state.” 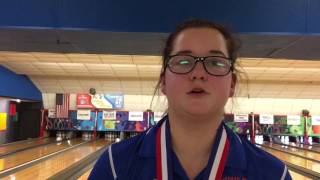